Usually, datasets for fraud detection are highly unbalanced. Instead of trying to resample the dataset, we are going to approach this problem as a Novelty Detection problem.

In this kernel, we will describe the dataset briefly and then we will compare multiple machine learning algorithms using some evaluation metrics.

Most common machine learning algorithms for this kind of tasks are the following:

A One-Class Support Vector Machine is an unsupervised learning algorithm that is trained only on the ‘normal’ data, in our case the negative examples. It learns the boundaries of these points and is therefore able to classify any points that lie outside the boundary as, you guessed it, outliers.

An autoencoder is a neural network that is trained to attempt to copy its input to its output. Internally, it has a hidden layer h that describes a code used to represent the input. The network may be viewed as consisting of two parts: an encoder function h = f (x) and a decoder that produces a reconstruction r = g(h).

In our case, we will train the autoencoder using samples of normal transactions only. When we feed the autoencoder an anomaly sample, the representation should have larger loss error. Therefore, by defining a loss threashold, this ANN model will work as novelty detection model. 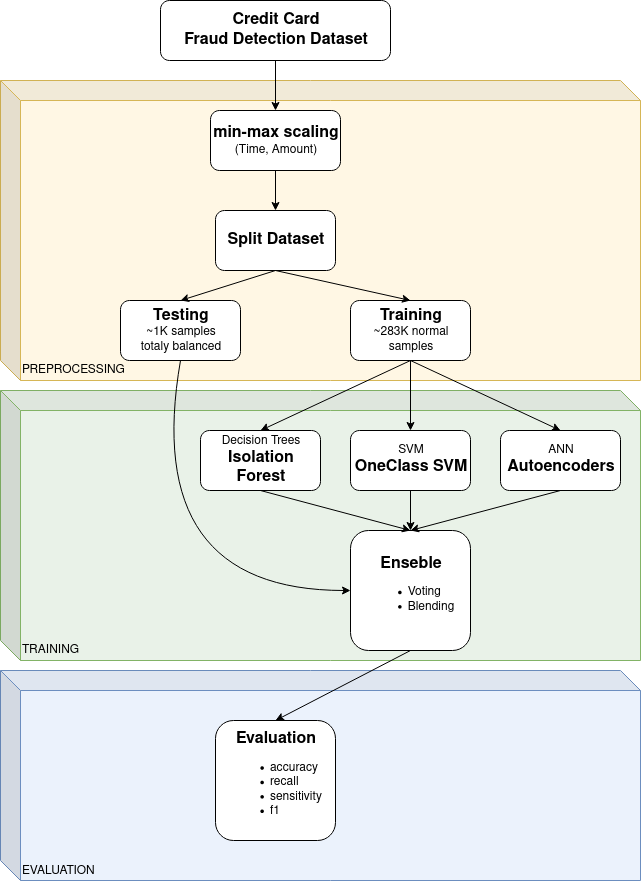 Time and Amount fields should be scaled

During this step, the dataset will be splited in two parts:

Novelty detection is concered as semi-supervised task due to the fact that only the normal samples are used during the phase of training. During the phase of evaluation, a balanced subset of normal and fraudulent samples will be used.

We are going to define some wrapper, these classes will work as adapters in order to have a uniform prediction.

This is one of the simplest way to combine multiple models in order to generalize better and achive better performance.

We are going to use the predictions as training dataset.

It's crusial to detect fraudulent transactions, therefor a significat evaluation metric could the simplicity. For every trained method and ensebling method the following evaluation metrics will be calculated: